If you ever plan to motor west, travel my way, take the highway that is best. Get your kicks on route sixty-six….

Those words blared through the speakers of our Ford Mustang, keeping time with the purr of that V8 engine on that old stretch of highway. 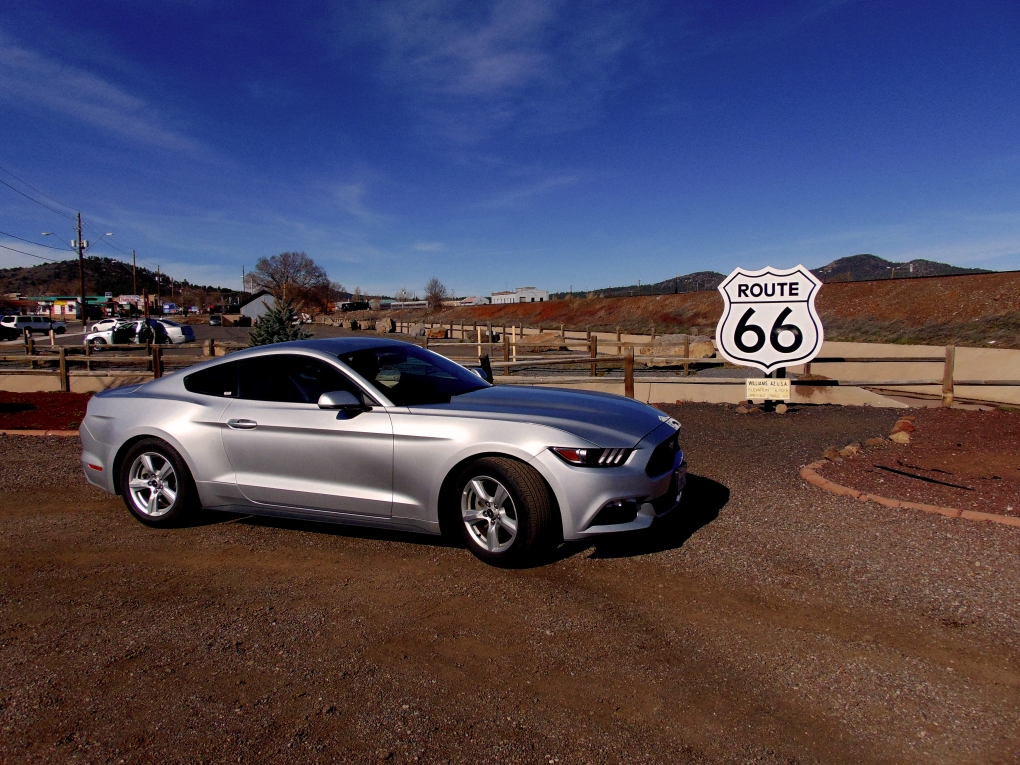 The Mustang in Williams, AZ.

On our recent Arizona adventure, we had the opportunity to travel the Arizona section of Historic Route 66. Cruising the entire route from Illinois to California is definitely on our bucket list, but this at least gave us a small taste until we can get that adventure crossed off.

Traveling west out of Flagstaff, most of the original Route 66 was absorbed by Interstate 40. Not until we passed Ash Fork did we find a stretch of old Route 66 that we could stay on for more than a couple of miles.

We made three stops on the route. The first was a quick stop in Williams and the second an even quicker stop in Ash Fork. Our third and favorite stop and the one we’ll dedicate the most writing to was Seligman, AZ.

Seligman and its history with the interstate are what Pixar loosely based the animated film Cars on. Angel Delgadillo, the man responsible for getting Route 66 listed as a historic site was born and still lives in Seligman. Angel was there at the beginning of Route 66 and unfortunately was there for its demise when I-40 opened. He used to run the towns barber shop, which is still there with the original chair and all his tools, but now houses a gift shop that includes everything you could ever want with the Route 66 logo on it. There are numerous little shops full of gifts and memorabilia. One shop even has a small museum with vintage cars and bikes in the back. The people are very friendly, curious about where you’re from and interested in what brought you their way. Seligman has this sort of magical quality to it. It brings you back to your childhood; back to a time where your imagination was free and untethered by the responsibilities that come with adulthood. There are motorcycles sticking out of the ground, numerous old cars and back behind the Snow Cap Ice Cream Shop is like stepping into another dimension. There’s a pair of legs sticking out of the dog house. A head in a toilet and so many other oddities it’s hard to describe them all. If we haven’t mentioned it yet, we love crazy, somewhat tacky places.

Now if that wasn’t crazy enough, we came into town close to the lunch hour.  Where do you eat in Seligman, AZ? The Roadkill Café of course! The café has an old school truck stop feel to it, but the food is pretty tasty if you can look beyond the crazy names. I believe we both enjoyed a Caddie Grilled Patty (hamburger). Their menu is so crazy and fun they actually sell copies of it in their gift shop!

From Seligman, Route 66 takes quite a leap away from Interstate 40. There are numerous small towns along the way, each with their own quirk. We didn’t stop at any of them but we were able to glance out the car window and see what once was.